On display at Grimsby Fishing Heritage Centre from 19 September 2019

This month, we take a closer look at a very rare and detailed wooden diorama, depicting the death of Lord Nelson. The model was made some time between 1810-1830. It shows the moment after Nelson was shot at the Battle of Trafalgar in 1805. However the model also tells us other stories. It shows the quarterdeck of HMS Victory in the middle of a fierce battle against the French and Spanish fleet. What makes the model so special are the many detailed scenes unfolding around Nelson’s death.

HMS Victory is a First Rate ship that was in active service from 1778-1812. She was Nelson’s flagship at Trafalgar. HMS Victory had a crew of 821 people and a displacement of 3,500 tons. She is now the oldest commissioned warship anywhere in the world.

The Battle of Trafalgar took place on the 21 October 1805. Vice-Admiral Horatio Nelson was the commander of the British fleet at Trafalgar. Nelson’s tactics and the high quality of the crew helped the British to defeat the French and Spanish fleet. It was an important British victory which ended Napoleon’s hopes of invading Britain. Before the battle started, Nelson gave the famous signal of ‘England expects every man will do his duty’.

The modeller has accurately recreated the scene. The detailed uniforms make it easy to identify the crew, despite minor errors like the Lieutenants having white shoulder pads. There are also several other inaccuracies or errors throughout the model.

The maker shows a high attention to detail across the whole piece. They attempted to recreate one of Nelson’s many honours that he wore on his Trafalgar uniform. Honours are like medals earned by members of the military. Here, the modeller has placed Nelson’s honours on white lapels on the front of his jacket. However, we know that Nelson’s Trafalgar uniform did not have lapels. We also know that Nelson was shot in his left shoulder, not in his right breast as shown in the model. This error in modelling may have been due to an incorrect news report at the time. A report by The Times said that he was shot through his ‘star’, which was one of his many honours. This is exactly what the maker has modelled; a gunshot wound through a star on Nelson’s right breast. This is possibly the most interesting error as it was the result of fake news!

The diorama also shows Nelson is lying in front and to the right of the ship’s wheel. He actually fell on the left hand side of the wheel, in front of the cannon closest to the stairs. Credit should be given to the creator for how close to the actual location they were. This is because it would have been hard for an amateur modeller at that time to know the exact spot where Nelson fell. The ship’s wheel should be on the other side of the mast.

The figures wearing red clothing are the Royal Marines. They are almost perfectly modelled. A minor fault is that their trousers are the wrong colour. The modeller decided to paint some of the crew as injured, a fitting detail considering the Victory took heavy fire during the battle.

This object is part of The Doughty Collection. This is a bequest containing over 200 historical objects, including ceramics, ship models and works of art. It was left to the town by Wilfred Vere Doughty, a local businessman. His father, Sir George Doughty, was an MP and mayor for Grimsby.

Wilfred replaced his father as director of the Consolidated Steam Fishing and Ice Company. He also became the owner and Editor of the Grimsby Evening Telegraph.

The newspaper was founded by George Doughty in 1897.

George Doughty collected many beautiful objects over his lifetime which were later inherited by Wilfred. Over the years Wilfred added to that collection with objects bought at sales and auctions. Wilfred passed away in 1941, leaving the collection to the people of Grimsby.

Click on the photos below to enlarge the photo 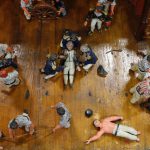 Lord Nelson lies mortally wounded after being shot by a French sharp shooter. The men kneeling around Nelson with the white lapels on the front of their jackets are Lieutenants. Captain Hardy is also on the quarterdeck. He is the figure walking up behind Nelson with the sword on his left leg. Some historians have argued that Nelson asked Hardy to kiss him on his deathbed. 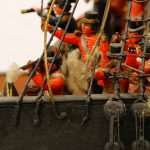 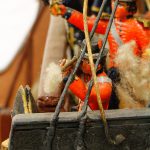 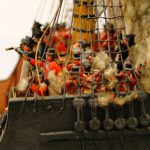 The use of cotton wool as gun smoke brings this scene to life by making the Royal Marines appear to be firing their rifles. They are shooting at the crew of enemy ships like the Redoutable. This is the ship that the French sharpshooter was aboard when he shot Nelson.

Minority sailors were fairly common in the Royal Navy at this time. The Royal Navy recruited men from all over the world. The crew of HMS Victory at Trafalgar had men from at least 24 different countries.

On HMS Victory’s quarterdeck there were twelve 12 pounder short cannons. With a total of 104 cannons, the Victory could put out a huge amount of firepower. 1.25 tons of cannonballs were fired from one side of the ship in the first round of shooting alone! 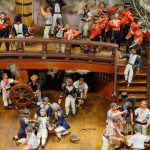 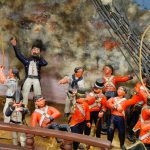 The addition of injured and dying seamen and marines grounds the piece in a dark reality. During the battle, 57 crew members lost their lives and a further 102 were injured.