Skip to main content
We’re open! You must pre-book by calling (01472) 323345. More information can be found on our COVID-19 page. We look forward to welcoming you back!

The next object in our Unlocking the Collection series is this beautifully detailed model of the Grimsby trawler Vascama.

It was made by Harry Jensen during the 1980s. Harry was the son of Peter Christian Jensen, Skipper during Vascama’s maiden voyage in 1935. Harry used original plans to create the model which took more than 200 hours to make.

Vascama was built by Cochrane and Sons of Selby in 1935 for the Atlas Steam Fishing Company Limited. She was registered GY164 and sailed her maiden voyage under Skipper Peter Christian Jensen. She was sold to the Admiralty in 1939 and converted into an anti-submarine vessel. Vascama returned to her original owners in 1946 and commenced fishing under her new registered GY147. She was broken up in 1962 after almost 30 years at sea.

Click on the photos below to enlarge the images.

Harry Jensen with his model of Vascama, c.1980. His father Peter, Christian Jensen was Skipper of Vascama on her maiden voyage in 1935. Courtesy of Grimsby Telegraph. 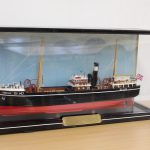 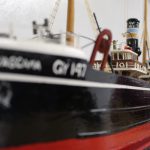 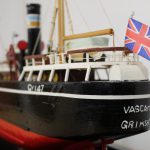 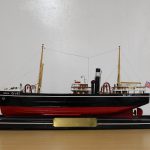