Skip to main content
We’re open! You must pre-book by calling (01472) 323345. More information can be found on our COVID-19 page. We look forward to welcoming you back!

At Grimsby Fishing Heritage Centre from May 2021

A Brief History of Tickler’s

For much of the 20th century, if Grimsby did not smell of fish, it smelled of boiling sweet fruit. This smell came from production inside the world-famous Tickler’s Jam Factory. Tickler’s Jam was founded as a brand in 1878 by Thomas George Tickler. The Grimsby factory made jam and marmalade. During the Boer War and the First World War the company won Ministry of Defence contracts to supply jam to British troops. Once a titan of Grimsby industry, at its peak the factory employed 1,500 people on the East Marsh. In 1956 the Evening Telegraph reported that in just three months of marmalade production the factory had ‘swallowed’ six million oranges. The young female employees at the factory were known as ‘Tickler’s Angels’. Tickler’s was bought out by St Martin Preserving Company in 1958. Sadly, the factory closed in 1973, 95 years after it was founded.

Tickler’s Jam was known worldwide. Even the New York Times paid respect to Thomas George Tickler’s life and legacy. The day after Thomas died in 1938, the newspaper wrote a column about his life. The focus of the article was the success of his jam factory and its role in the First World War.

The plate and figurine will be on display until 31 June 2021. 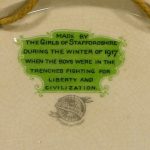 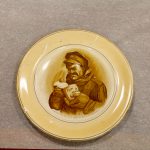 During the First World War Tickler’s supplied jam to the British troops. The soldiers mostly got tins of apple and plum jam, but sometimes if they were lucky they got strawberry or raspberry. The soldiers preferred strawberry and raspberry jam because they were higher quality.

The annoyance of soldiers at almost always getting plum and apple jam is shown in this plate. The cartoon is of a character called ‘Old Bill’. The caption underneath reads: ‘When the ‘ell is it going to be Strawberry?’ The cartoon is called ‘The Eternal Question’ by Bruce Bairnsfather, a First World War officer and cartoonist.

Once the jam had been eaten, the empty tins were sometimes used to make grenades. These improvised bombs were known as ‘Tickler’s Artillery’!

Tickler’s was so significant in the lives of British soldiers that they even wrote a song about it:

How I love old Tickler’s Jam

Plum and Apple in one pound pots

Every night when I’m asleep

I’m dreaming that I am

Forcing my way through the Dardenelles 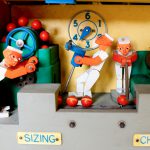 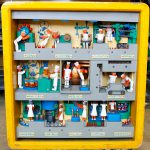 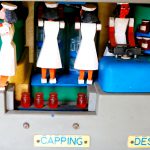 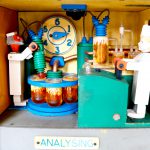 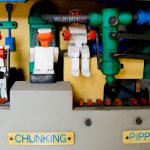 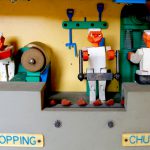 This wooden model shows the 12 stages involved in making a batch of Tickler’s marmalade. Starting with sizing the fruit, the ingredients go through lots of machines and processes before being despatched as the finished product. It may have been displayed in the main office at the factory. Originally many of the parts moved to show the production process in motion. Sadly, the parts no longer move. 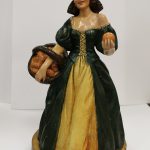 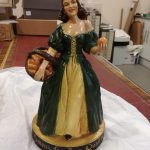 Nell Gwyn marmalade was a highly successful product made by Tickler’s. Eleanor Gwyn, normally called Nell Gwyn, was an actress in the late 17th century. She was also a mistress of King Charles II. She is known to have sold oranges in the areas around Drury Lane theatre. This may be why Tickler’s used her as a mascot for their marmalade.